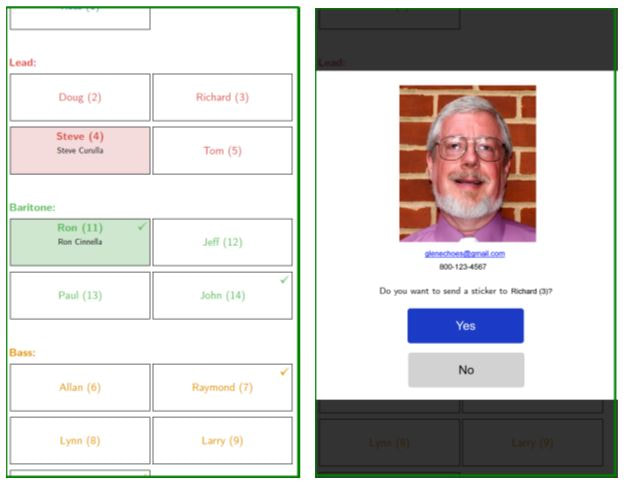 AHB will be trying out a new Dance Card method this year. For those who have not attended before let's start with a brief description of what dance cards are and what they are for. If you are a veteran then you can skip the next section.

Historically the dance card was a sheet of paper with the names and voice parts of all AHB attendees. The dance card was accompanied by a sheet of stickers with your name and contact information on them. After you sing with another person for the first time during the rally you exchange stickers, you put their sticker in the block on the dance card where their name appears. At the end of the rally you have a record of who you sang with and their contact information.

The dance cards serve a second purpose; if you sing with every other singer of the other three voice parts you win a prize named a Tramp Award. If you learn a second part of at least one of the AHB songs and sing with every other person of all four parts you win a prize named a Super Tramp Award. Working toward the tramp awards is optional, but is a lot of fun and a great way to meet everybody and make some great music!

The third purpose of the Dance Cards is that the name of each person winning either tramp award is put in a box and two names are randomly picked, and two lucky Tramps will get 50% off their next AHB rally.

The new system is a web-based program that works in a browser on your tablet or smartphone. Along with the information packet you get when you check-in at the rally desk you will get a card with a QR-Code on it. This QR code gives you access to a dance card webpage that is specific to you; each other attendee gets their own QR-Code. When the webpage opens you will see the names of the other singers identified with their voice part. When you have sung with someone you simply go to your webpage and click the name of the person; their photo and email address will appear (this can also help you find someone you don't know). When their photo pops up there is a button that you click which will update the other person's webpage to indicate that you sang with them. They do the same for you and their name will be highlighted on your webpage showing they sang with you.

For those who don't have either a tablet or smartphone, you are still covered. We will have provision for you at the rally.

When all the people of the other three parts are high-lighted you can claim your Tramp Award, or sing with everyone of all four parts and claim your Super Tramp Award. All Tramps will be entered into a drawings for two chances to win a "50% off" your next year's attendee fees.

I believe it would be a very good idea for each person to bring a battery type phone charger with you, especially if your phone is a battery hog. Trying to find a place to plug in a wall charger would be very inconvenient.

Here is an example dance card

This card only shows a few folks, but it will give you the idea.


When you sing with someone just click their name and the screen to the right below will show up. If you just wanted to see what they looked like then click no, if you sang with them then click yes.

The UK Harmony Brigade used this system earlier this year and they were very happy with it. The New England Harmony Brigade intends to use it as well in September. After the rally we will likely have a survey to see how satisfied folks are with and and then make a decision whether to continue using the new system or not.

We owe a great debt to the person who created the new system, and to Del Merritt for updating and customizing the system for us, as well as setting up a server to run the program for the AHB rally. Also, thanks to Jeff Porter and Richard Townsend for supplying the data and many of the photos to make the system work.